Fence Around the World: Part 2

Here is part two of the fence around the world blog. I had a few responses from part one including from one person who played a little game of trying to figure out which country the fence was from before scrolling down to the text…give it a try.

These pictures have been taken over many years and in many countries. My appreciation for fences and barriers goes back to my childhood when I helped a neighbor to stain his wood fence with Creosote. I liked the smell as well as the new looking fence. Of course, Creosote is banned today and has been replaced by pressure treated lumber. I still remember the smell even 50 years later.

I went to work in the PVC fence industry in about 1982 and have continued my appreciation for all types of fence and barrier designs, taking pictures whenever possible.

If you consider a fence to be a barrier, it can include walls, gates, railings, balconies, hedges and just about any material that forms a barrier.

Photo: A dry rock wall, very common in places with rocky ground conditions. I found this wall in Greece surrounding an olive grove. The ground is so rocky that digging one hole to install a fence post could take several hours. These rocks were probably dug up by the farmer as he tended his land. I imagine the generations before him probably started the wall many years ago.

Photo: This is one of the most economical wooden fences on the market today; usually applied in areas subject to snow drifts. In this case, it is helping to stop sand erosion in the Outer Banks of North Carolina. It’s made from a combination of twisted wires and wood slats assembled on a weaving machine and supplied on rolls. The posts are pounded into the ground and the fence is nailed, or stapled, to the post as it is unfurled. Some of the fence is already buried under the sand. 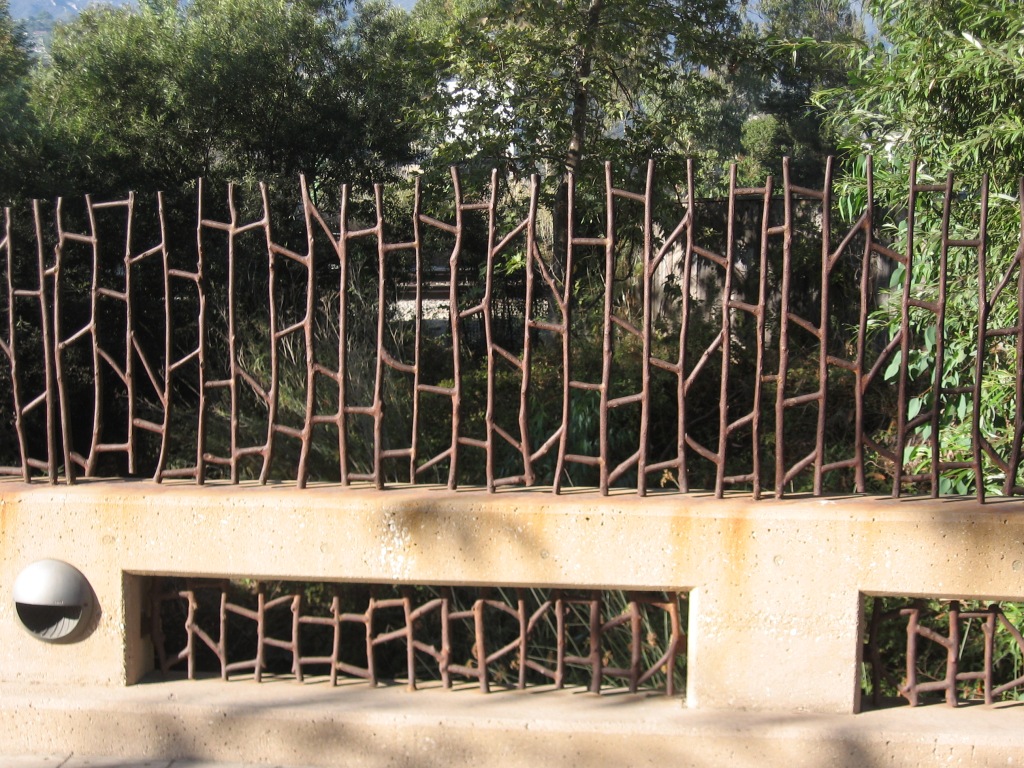 Photo: A combination of concrete and steel, artistic and functional as a barrier, this one in Mogotes, Colombia, was part of a bridge to prevent vehicles from driving off the edge.

Photo: One leaf of a double drive gate, highly decorative and hanging from a stone pillar, this is the entrance to Java Joe’s coffee plantation on the big island of Hawaii. We ventured in there for a taste of the famed Kona coffee.

“The fence that makes good neighbors needs a gate to make good friends.” 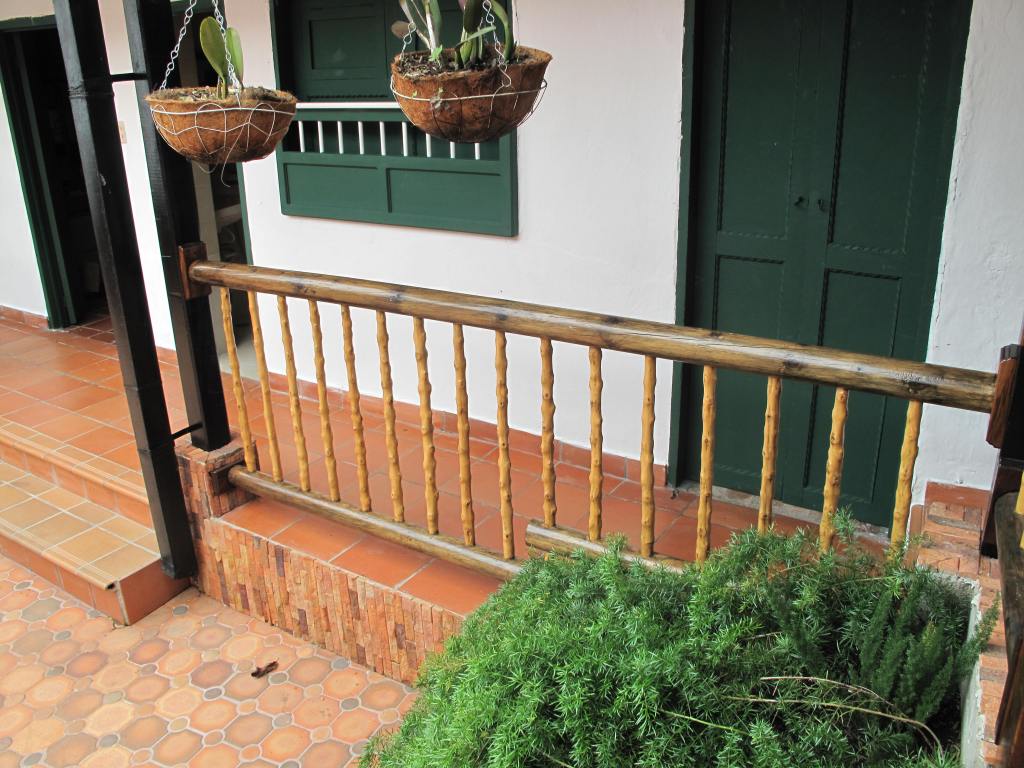 Photo: This is a bamboo railing system. I am highly involved in training contractors in the US on the correct ways to install code approved railings; so I was curious when I spied this unusual railing in Mogotes, Colombia. Made completely with bamboo, it was actually incredibly rigid, as well as naturally aesthetically pleasing.

Photo: Tulsa, Oklahoma. the American fence industry had a school where installers learned various aspects of installing a variety of fence materials. Here the team are assembling a PVC fence. The instruction included how to assemble, how to follow a sloped terrain, how to field fabricate when needed and general best practices of installation. I was the instructor at the PVC station for many years and enjoyed teaching the students tips and techniques of installation.

Photo: A pigeon is dancing between the grid bars of the shadow of a security gate. The gate is located in Wellington, New Zealand at the Te Papa cultural center.

Photo: Beware of the dog down under! Melbourne, Australia was the location of this steel gate giving one plenty of warning that Rover was on the other side. We didn’t test fate; we took their word for it that the dog was there.

Photo: Can’t remember exactly where this one was taken, but I sure wouldn’t want to try to climb over it!

“Love your neighbor as yourself; but don’t take down the fence.” – Carl Sandburg 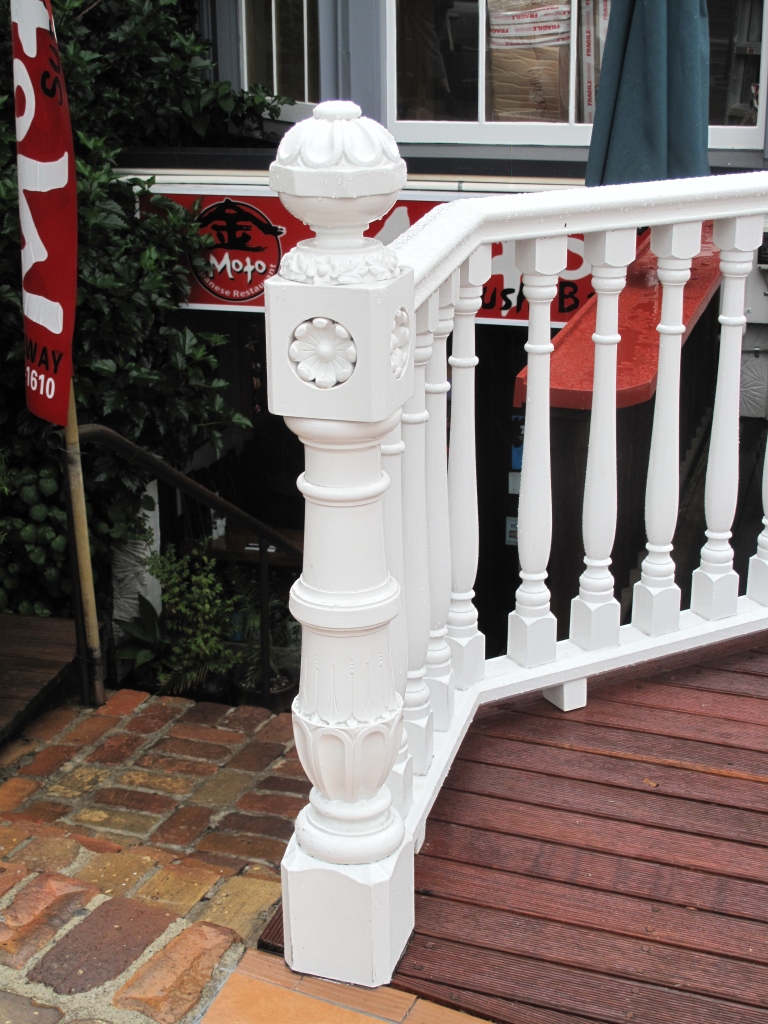 Photo: Auckland, New Zealand. This beautiful ornate, wooden newel post was part of a small railing around a café. It is by far one of the most decorative railings that I have seen in my travels. 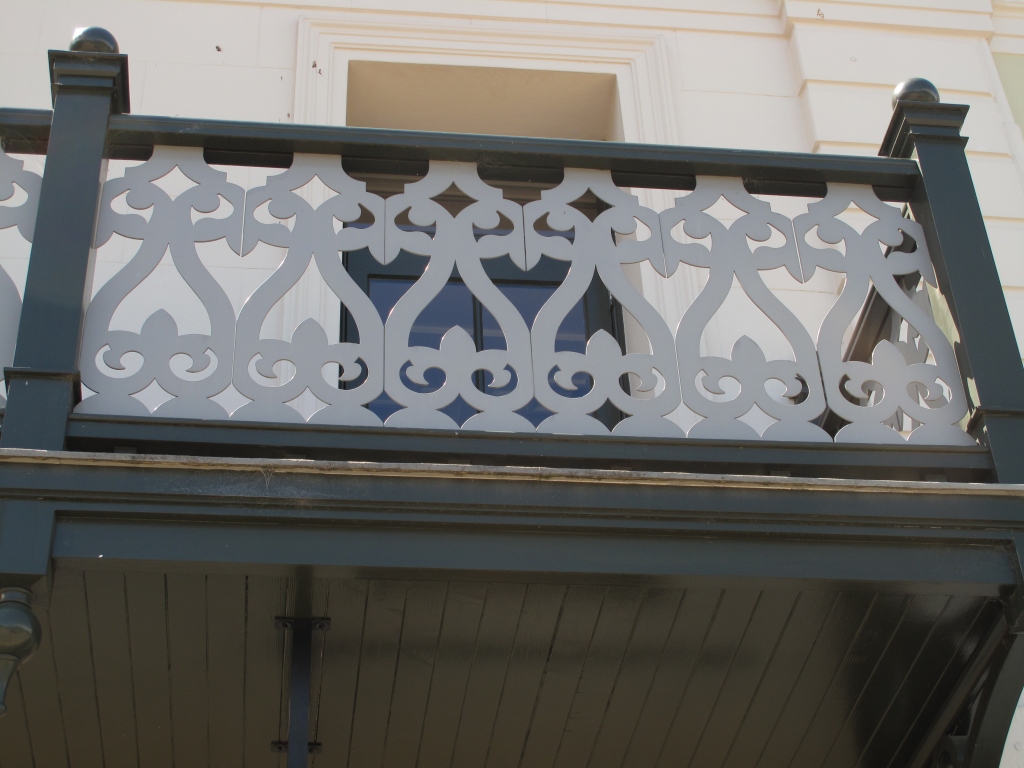 Photo: Speaking of railing, this is also quite decorative. Six duplicated balusters side by side. This was on the island of Naxos in Greece. 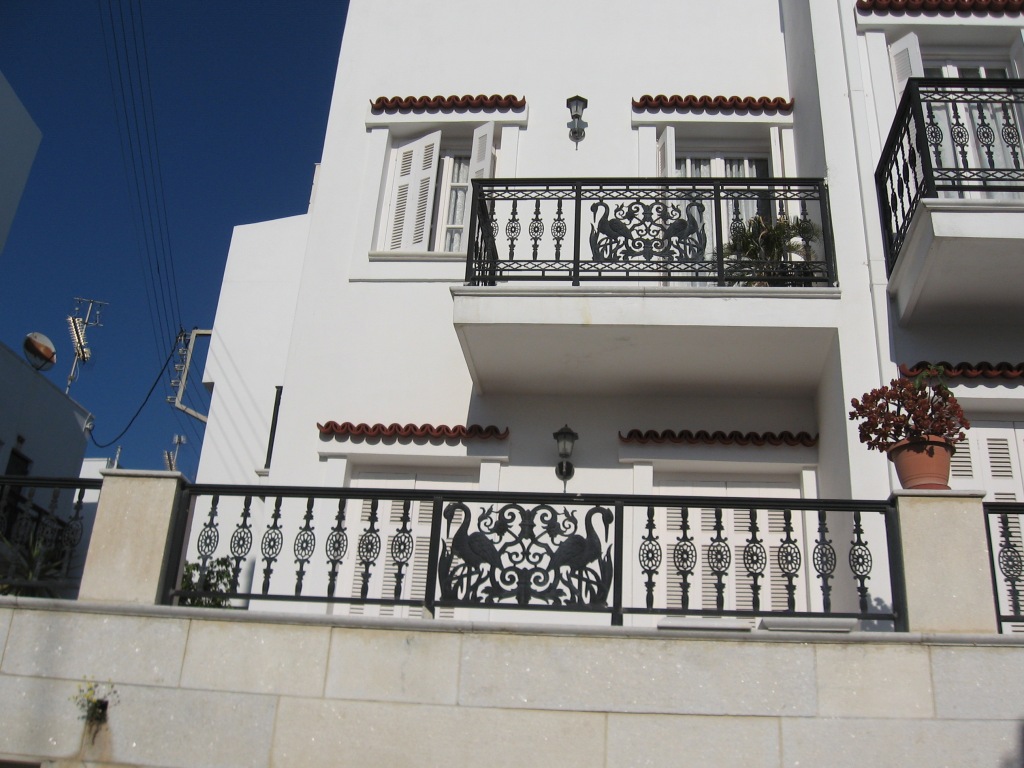 Photo: A common sight in Naxos, Greece, are precast aluminum designs incorporated into railing systems. It adds quite the regal look to the balcony.

Photo: Still in Greece, this one was taken on the outskirts of Athens. This fence company was a little short of ground space to set up their displays, so they went overhead and were able to exhibit a lot of different styles.

Photo: You know you have a strong railing system when everything around it deteriorates! This is a common sight in Greece; some houses are just falling down and the house next door is immaculate. It adds to the character of the place! 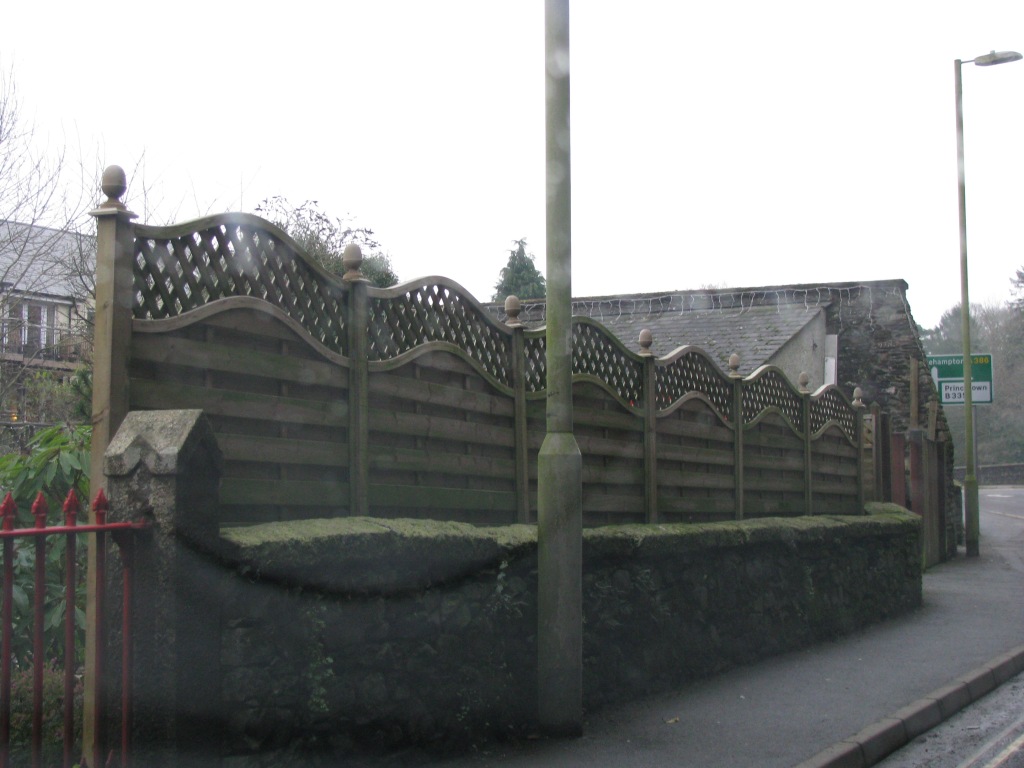 Photo: On the outskirts of the beautiful Dartmoor National park in England are many small market towns. This shot was taken outside Tavistock. It is a rolling fence made from Larch Lap panels and lattice topper. The climate is quite damp as the moss on the fence will attest.

Photo: Not such a damp location for this one; in fact, quite the opposite. This arch with gates is on the Island of Santorini in Greece.

Photo: This picture was taken south of the Mason Dixon line while I was working in the area. This shows a pretty severe case of cribbing, when a horse chews the wood fence. I think they are sharpening their teeth and like the texture of the wood. Maybe a horse person could give a better description of the practice. This fence is in dire need of maintenance.

Photo: Back to Greece again for these beautiful gates! The design incorporates the mythological dolphins. It is said that the souls of the dead were taken to the Fortunate Isles on the backs of the dolphins.

Photo: This was taken at the end of the week long fence school which had finished for another year. Some of the students wanted to be remembered, and were invited to install their company signs on the fence that the teams erected. Each of the safety helmets on top represents a team or a group of seven students; the white one was for the instructors.

It is amazing how many barrier pictures I have in my collection, and it was very hard to pick the best ones for this blog. I hope you have enjoyed seeing some different styles from what you are used to. I leave you with these quotes:

It doesn’t matter which side of the fence you get off on, sometimes what matters most is getting off. You cannot make progress without making decisions.” – Jim Rohn

“Silence is the fence around wisdom.” – German proverb